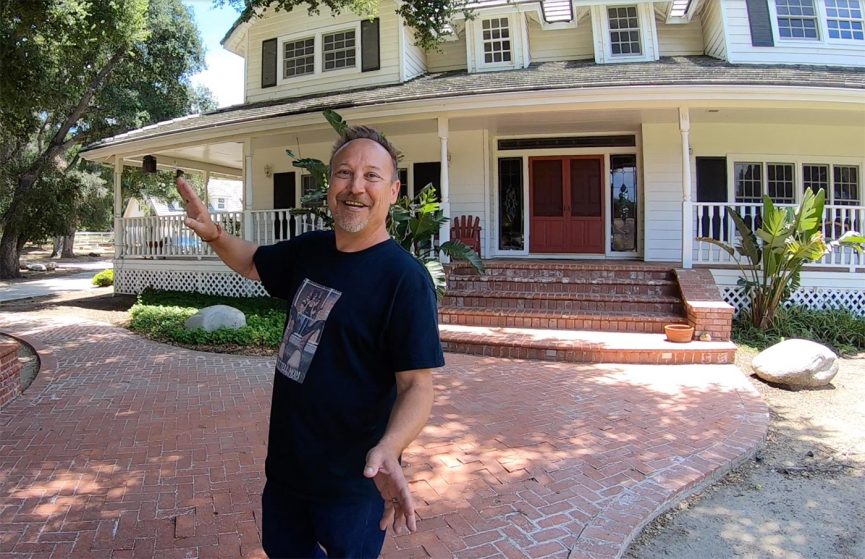 In case our recently announced soundtrack wasn’t enough to prove our fandom of Don’t Tell Mom The Babysitter’s Dead, we also decided to take Keith Coogan back to the original house where the 1991 cult classic was filmed.

Our friends over at The A.V. Club have the exclusive, give it a watch, and embrace as you travel back to the early 90s, complete with summer vacation nostalgia.

Oh, and also, don’t forget to pick up our soundtrack reissue on limited “Clown Dog” splatter vinyl, and “I’m right on top of that, Rose!” colored vinyl. Limited to 1,000 copies worldwide. 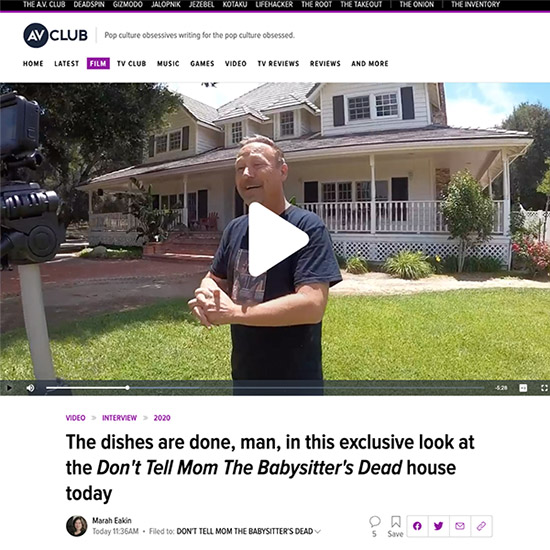 No stranger to the vinyl resurgence in recent years, independent record label Wargod has set their sights on the 1991 cult-classic film, Don’t Tell Mom The Babysitter’s Dead.

And rather than reissuing the soundtrack onto vinyl and calling it a day, Wargod decided to go big. The label invited Keith Coogan (“Kenny”) to spend a day at the original filming location – his first time visiting the “Don’t Tell Mom house” since production wrapped in the Summer of 1990, three decades ago.

Documenting the afternoon with Keith Coogan at the original filming location, Wargod admits that the plan was more motivated out of a love for the film, rather than a clever marketing tactic for their forthcoming soundtrack.

“I think our fandom will really shine through” says Wargod co-founder, Ryan O’Connor. “There’s a lot of red tape and licensing restrictions with the reissues we do, so getting an opportunity to hang out and document Keith Coogan revisiting the original house to coincide with our soundtrack release – it was honestly pretty surreal, and as a huge fan of the film, entirely worth the added effort.”

“We wanted to give fans of the film something nostalgic and fun, beyond just the soundtrack reissue itself” adds Wargod co-founder, Jay Reason. He continues, “what could be cooler than bringing “Kenny” back to the original location where it all began? Also, a big thank you to Aaron Drake for helping tie it up with sound mixing on a windy ass day!”

Wargod business manager Mark Silverman mentions: “Reliving a childhood favorite and getting to work with Keith right as summer vacations should be starting was way better than watching the grunion run or cleaning the fat vats. Thanks to Keith for giving us this opportunity! Rock and Roll!”

In the behind the scenes exclusive, Keith Coogan shares little known stories from production, including an unsuccessful audition for Clown Dog Brian, which ultimately led to him being cast as the endlessly quotable, pot-head delinquent Kenny.

As for the soundtrack itself, it’s out now on limited edition vinyl. Packaging includes a heavy-duty gatefold jacket, and a Clown Dog inspired dust sleeve.

Limited to only 1,000 copies worldwide, 800 will be available from Wargod’s website, including 300 on “Clown Dog” splatter vinyl, and 500 on “I’m right on top of that, Rose” colored vinyl. Wargod notes that there will be no pre-order window… “the records are done, man!”

Wargod previously reissued the True Romance soundtrack onto vinyl, including a deluxe box set. The Tony Scott cult-classic was written by Quentin Tarantino and the box set was even praised by the iconic composer himself, Hans Zimmer. Last year for Record Store Day, Wargod released a 20th anniversary vinyl edition of The Sopranos soundtrack, among many others.